Apparently, when I was worrying about having only 2TB of Free Space on my Synology NAS, I did some digging and upgraded my Synology from a DS415play to a DS1515+ to alleviate some issues with upgrading in the future due to 32-bit vs 64-bit kernel limitations within the Synology environment.

What it boils down to is that I bought 8TB drives and when my array was trying to extend itself above 16TB, it failed due to the 32-bit limitation of the kernel.

And what a NAS it is. The DS1515+ adds another drive to it bringing it to 5 total drives internally. It also has more network ports as well as some additional USB and SATA ports on it.

One of the big features to me about these devices is what’s known as Synology Hybrid Raid (SHR). There are two levels of this. SHR and SHR2. Essentially how many drives can fail before you lose data. SHR can lose one drive and SHR2 can lose 2 drives.

I had both set up as SHR volumes. So they could realistically lose a single drive and be fine.

So both volumes on each NAS were in drive failure. With SHR, you can pull a drive and insert any size drive in its place. So long as it meets some specific criteria (like not going over 16TB on a 32-bit kernel) you can then add that drive to the current volume. I use this to my advantage by taking out a smaller drive and reinstalling a larger drive to increase my array size. It takes a few days to change out an entire array since it requires a data integrity check on the new drive before the NAS can insert the drive space into its current volume.

So now that I’ve done that and put five 8TB drives into the NAS, I now have a full 29TB of free space to play with.

Transfer all of my data from the old NAS and voila!

The DS1515+ is noticeably faster than the DS415play. I had assumed that it would be for raw data transfers since it’s a better processor and has a 64-bit OS running the show.

However, the DS415play was billed as a media center device and I was shocked to see transfers in my media along the lines of actual on system storage with the DS1515+. Most of my media usage is via kodi (on a mac mini front end) or an iPad using the Synology apps. In both cases, the snappiness is extraordinary. I had forgotten how zippy my old stuff was with kodi (called xbmc back then) installed on an HP workstation with 8TB of space internally. Those were zippy SAS type drives as well.

The speeds on the DS1515+ running on my internal network are just as zippy. Even with a bottlenecked switch I had to replace when the previous one failed. (I have too many switches in my basement rack, I fear).

So the upside is that I now have a very large amount of storage, a snappier system and better reliability with more drives.

Note to my dev friends: There are a ton of packages to build your own home based dev studio. I guess exFAT support does cost $3.99 though. 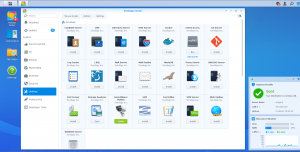 It is utterly amazing how much awesome they package into a Synology NAS.

I have 2 of these at work which helped to make my decision on using it at home. However, at work, I only use them for fileservers and iSCSI targets and don’t have a lot of comparative analysis to go from other than a binary “it works/it’s broken” type of view. With that said, I had to transfer about 150GB of data (over 200,000 files in almost 30,000 folders) on an iSCSI interface between a server running Windows Server 2008 r2 and the Synology DS1515+. It was transferring files at 160MB/s at times.

Blazing fast transfers, in other words.

Definitely something special here. And I can access my data remotely through their apps. Even better.


Warning: count(): Parameter must be an array or an object that implements Countable in /homepages/22/d169298581/htdocs/tarrbot.net/wp-includes/class-wp-comment-query.php on line 405


Warning: count(): Parameter must be an array or an object that implements Countable in /homepages/22/d169298581/htdocs/tarrbot.net/wp-includes/class-wp-comment-query.php on line 405